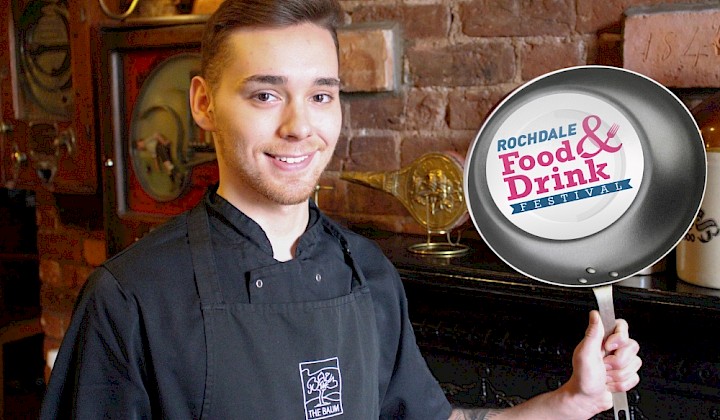 FOOD AND FUN: Austin Hopley, chef at The Baum will be cooking at Rochdale Food & Drink Festival

They’re not television stars or best-selling cookery authors, but two Rochdale chefs - Austin Hopley and Adolfus Lewis are preparing to put their culinary skills to the test in front of a live audience for the very first time at the town’s food and drink festival.

Austin, chef at the multi-award winning pub The Baum, and Adolfus - from the new Hare on the Hill in Littleborough will make their debuts at Rochdale Food & Drink Festival at the town hall on Saturday 16 March.

Austin, who has worked at The Baum for 3 years has had a passion for cooking since he was just 13, and he’s been working in kitchens ever since, including a spell at a prestigious hotel in the United States, before returning home to his family in 2016.  With a vast experience cooking all kinds of dishes and preparing daily dishes from scratch at The Baum, he says one of his many specialities is desserts, and he jumped at the chance to appear at the festival:

“I’m really looking forward to it … I remember watching Ainsley Harriett cooking at the Feel Good Festival a few years ago which looked a lot of fun, and I’m excited to be appearing at this festival for the first time. Hopefully some of our regulars will come down and support us.”

Adolfus Lewis had 26 years’ experience as a chef before joining the team at the Hare on the Hill in Littleborough when it opened last December. This included a spell working in Barbados – and whilst the pair are still finalising their festival plans, Adolfus is promising the demonstration will have a Caribbean feel, with a jerk chicken already on the menu.

Councillor Janet Emsley, cabinet member for neighbourhoods, community and culture at festival organisers Rochdale Borough Council said: “I’m looking forward to seeing Adolfus and Austin cook at the festival. We’ve lots to see and do on the line-up again this year but the chefs cooking in our kitchen are always amongst the highlights of the day. It’s great to be able to say that four of our chefs are local … this festival provides a great showcase for what the town has to offer and builds the borough’s reputation as a great foodie destination.”

Tickets for the demonstrations are on sale now, but if you don’t manage to grab a ticket there’ll also be a free seating area in the Clock Tower Dining Room to watch on big screens and soak up the festival atmosphere!

The festival kitchen, sponsored by local business Quirky Catering, will be located inside the grade one listed town hall along with plenty of stalls and free things to do. There’ll be an outside food and drink village, a series of free themed demonstrations including cocktail making and artisan chocolate making, plus live music from local acts.

Over on the indoor Family Stage Mr Bloom from CBeebies will be performing during the day, alongside lots of other family entertainment.

Rochdale Food and Drink Festival is on Saturday 16 March, open from 11am to 8pm and admission is free. It is staged in partnership with Premier Kia.