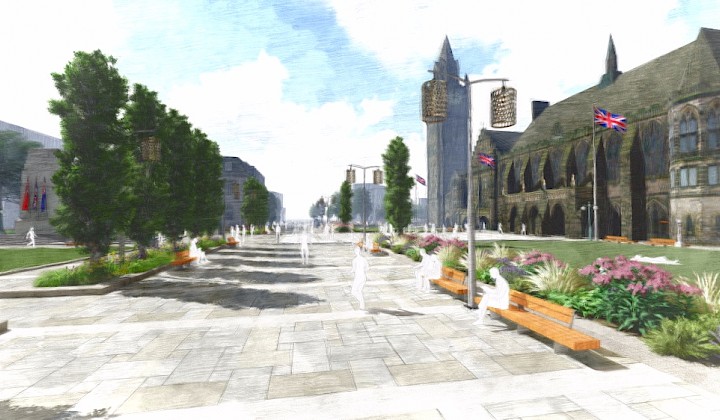 The first of a world class team who will transform Rochdale’s iconic grade I listed town hall and the surrounding area has been appointed by the council.

Landscape architects Gillespies, who have worked on commissions around the globe, have been appointed to redesign Town Hall Square as part of a planned £3m transformation of the space.

The team, whose previous projects include the restoration of the Piece Hall in Halifax, Bradford City Park and Media City UK in Salford, impressed selectors with their ambitious plans for a dramatic new setting for the neo gothic town hall to create an outdoor space to rival the best public squares in Europe.

Emerging proposals include the removal of the road and parking in front of the town hall and the creation of extensive pockets of greenery to create a superb outdoor space as part of a completely reimagined public realm in Rochdale town centre. The newly designed square will be multi-functional and designed to accommodate large-scale events, such as the town’s hugely successful Feel Good festival.

The ambitious plans will encompass the whole of Town Hall Square, including the esplanade, the area behind the town hall up to Packer Spout Gardens, and sections to the side, including the island where the new Gracie Fields statue was recently unveiled.

A major aim of the project is to better connect the town hall with the grade I listed cenotaph and memorial gardens and other heritage and cultural treasures in the town centre, including the multi-award winning river re-opening scheme and Touchstones museum.

Jim Gibson, partner at Gillespies, said: “Many years ago, I visited the town hall as a young student and remember being wowed by the architecture, but frustrated by the setting of it in a sea of tarmac. As soon as this commission was launched, I saw the potential of the project in repositioning the town and with our practice’s successful portfolio of delivering large scale transformational public change, I knew that we would be an ideal partner.”

The Town Hall Square scheme is part of a major project to restore the town hall following a successful round one bid to the Heritage Lottery Fund for £8.9m. The entire project, which will see around £16m invested in the building, involves the restoration of its historic treasures, including the Magna Carta mural and extensive stained glass windows, as well as making the building more accessible and opening the historic library space on the second floor as a public space.

Interpretation within the building will tell the story of Rochdale and its people and there will a huge number of opportunities for locals to be part of the project though apprenticeships and engagement activity.

Jim added: “It’s an incredibly exciting commission because the council has so much ambition for the area and the restoration and re-invention of the town hall and its setting will be genuinely transformational for the town. We’re honoured to be involved in such a major civic project and will be working closely with the rest of the town hall team to make it a success.”

Other ideas Gillespies have put forward for the space include intricate designs in sections of the paving, similar to the symbols and motifs inside the town hall which reflect Rochdale’s history as a focal point for the global textile industry.

Councillor John Blundell, cabinet member for regeneration at Rochdale Borough Council, said: “We’ve always been clear that our heritage assets, which we’re lucky to have in abundance in Rochdale, will be a major driver for our continued £400m regeneration programme.

“Town centres are changing fast. We’re developing our retail offer, but stand out public spaces, where people can come and spend time, whether it be at events, visitor attractions like the town hall or in our many cafes and restaurants, are incredibly important.

“What we’ve got in the town hall is something really special, probably the best civic building in the country, and I’m confident that Gillespies can help us create something in Town Hall Square which will compete with the best public spaces in Europe.”

More than 60 firms expressed an interest in the Town Hall Square project, with eight being shortlisted before Gillespies were selected.
The architects for the town hall will be appointed in February, alongside the activity planner and exhibition designers. Cost managers and civil engineers are already on board. The entire town hall project is due for completion in 2023.

The initial ideas for Town Hall Square will go out to public consultation in the summer.