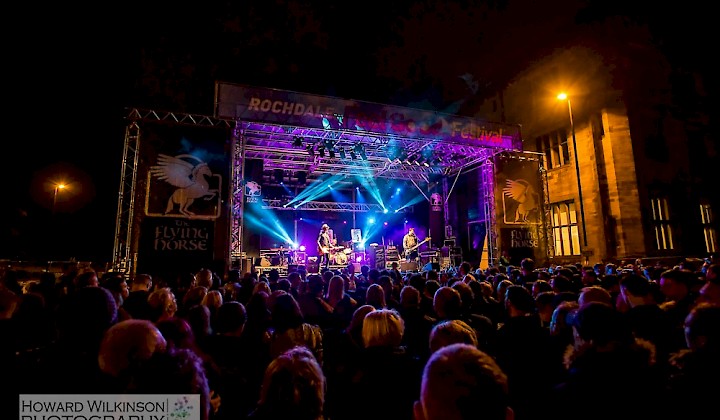 Despite unseasonal weather the town centre was filled with a massive array of entertainment for the Rochdale Borough Council-organised annual summer event.

The festival market and food village provided a wide range of stalls selling gifts and treats for all the family, plus tasty food and drink from around the world.

Councillor Janet Emsley, the council’s cabinet member for culture, health and wellbeing, who attended on both days said: “The line-up and sheer range of entertainment served up this year has been absolutely superb. We certainly delivered the feel good factor and although the weather wasn’t too kind, people have once again come out in their thousands to support the festival and we are very grateful of the support and lovely feedback received. The town was busy, the atmosphere fantastic and once again we showed that Rochdale can stage the best free music and food festival in the North West.”

On Saturday, the main stage sponsored by The Flying Horse Hotel and hosted by Rochdale AFC stadium announcer DJ Dave Sweetmore, was opened in style with a storming party starting set from Rochdale Battle of the Band winners The Jackson Kay Band. They were followed by new country/soul singer Amy-Jo Clough, making her second appearance at the festival.

Funk pop outfit The Bright Black and The Twisted Dolls, two of Manchester’s best new live acts, followed with rousing sets, gaining them a lot of new fans in Rochdale and getting festival goers dancing and singing in the rain!

Local favourites Boomin, making their main stage debut, produced a memorable set too, blending classic rock with modern chart covers plus their own original feel good material and a touch of madness!

Alex Cornish and his band brought some melodic tranquillity to the evening with his blend of contemporary rock, folk, orchestral and relaxing ambient sounds.

Setting the scene for the headliners, Resonators took to the stage just after 8pm, with a predictably energetic hour from one of the UK’s top reggae acts. The band, who release their new album ‘Imaginary People’ next month quickly won over a packed Rochdale crowd with their show which was delivered with infectious enthusiasm.

Headliners The Fratellis followed, getting a phenomenal reception from around five thousand fans, playing for over an hour. The unique voice of lead singer Jon Fratelli lead the crowd through a hit packed set including  'Whistle for the Choir', 'Henrietta', 'Mistress Mable,' 'Baby Fratelli' and of course their anthemic 'Chelsea Dagger’ getting the crowd into a frenzy.

During both days Stage 2 entertained the crowds, showcasing some of the best live acts in the borough - featuring local bands, singers, dancers and musicians, including Rochdale guitarist Becky Langan, family theatre from ‘Les Enfants Terribles,’ Whitworth Amateurs and many more.  There was hilarious stand-up comedy from Comedy Club for Kids and on Friday evening a comedy night was staged at Mecca Bingo.

On the opening evening Stage 2 was headlined by Kent 5 piece Keston Cobblers Club, with a crowd of over 300 treated to three hours of music some of the biggest names in folk including Greg Russell and Ciaran Algar, Maz O’Connor and Mikey Kenney.

Plucky abseilers descended by rope down Rochdale Town Hall’s190-ft stone clock tower to raise money for Our Big Day’ an event for cared for children and their foster families in Rochdale, Heywood and Middleton. Brave participants included The Mayor of Rochdale Councillor Ray Dutton.

The summer festival was funded by Rochdale Borough Council with sponsorship from from Rochdale Football Club, The Flying Horse Hotel, Link4Life, The Royal Toby, Metrolink, Rochdale Observer and Key 103.

For photographs from the festival and to leave your feedback on the event visit www.facebook.com/feelgoodfestival or visit @feelgoodfest on Twitter.