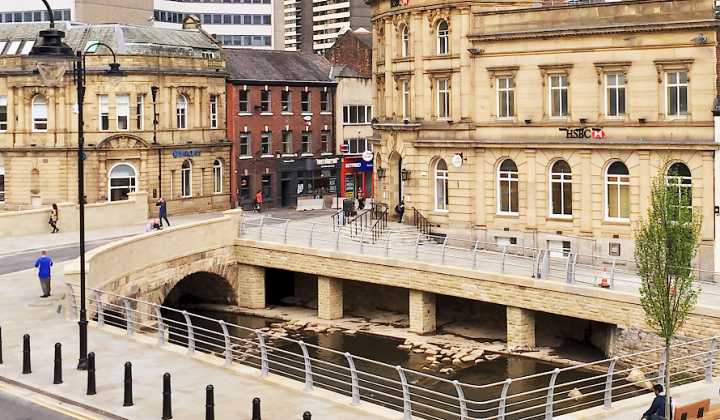 The newly re-opened bridge and river

An award-winning project to re-open Rochdale’s River Roch and expose the town’s historic bridge more than 100 years after they were concreted over is now complete.

The original bridge was built in the medieval period and expanded as the town grew, with sections also dating back to the Regency, Georgian and Restoration periods.

During the early 1900s the bridge and river were covered to make way for the expanding tram network and they have been hidden from view ever since.

Now the historic bridge can be viewed once again and Rochdale is now the only borough in Greater Manchester to have a river running through the heart of its town centre.

The Rochdale Borough Council scheme, backed by the Heritage Lottery Fund and Environment Agency, is part of a £250m town centre regeneration programme which has seen the area change beyond recognition since 2010.

Trees and benches have been installed around the reopened river and nearby lower Yorkshire Street and Baillie Street will be repaved in traditional York stone later in the year to complement the area’s heritage. A statue dedicated to the late Rochdale-born singer and actress late Gracie Fields will also be erected in the town hall square in autumn.

Leader of Rochdale Borough Council, Councillor Richard Farnell, said: “This marks another milestone in our ambitious regeneration programme, following the news that Next, M&S and Reel cinemas will be part of our new shopping and leisure development, Rochdale Riverside. We’re working really hard to give our residents and visitors the kind of vibrant town centre that they want and we’re well on our way to achieving that.

“With a Grade I Listed town hall, Saxon church and Grade I Listed war memorial just a stone’s throw from the newly reopened historic bridge, it’s clear that Rochdale has some incredible heritage. Now, with the completion of this project, we have shed even more light on our borough’s fascinating history.

“We’ve already seen lots more visitors to the town hall since the tram came to Rochdale town centre and I’m confident that even more tourists will come to enjoy all our town has to offer now this important scheme is complete.”

The bridge played a key role in the development of Rochdale as a town, with merchants using it as a means to travel over to Yorkshire to buy wool, which was then finished in Rochdale’s mills. In the 1700s, as one of only two main routes from Lancashire into Yorkshire, it was used by people from far and wide, making Rochdale one of the most important towns in the region.

The re-opened river is expected to bring an extra £6.72m into Rochdale’s economy over the next ten years.

The project recently won a national planning award and has also collected a Considerate Constructor Scheme award for outstanding project management, as well as the 'Green Apple' award for environmental good practice and has been shortlisted for a number of accolades in the North West Construction awards.

The scheme, which has also received support from the North West Regional and Coastal Flood Committee, comes with flood risk benefits worth £4.42m, including flood protection for 40 properties in the town centre and improved drainage for a further 500 properties in the town centre. It also reduced the impact of last year’s Boxing Day floods by helping to prevent flood water reaching the town hall.

The project will also help attract new wildlife. Brown trout, kingfisher and wagtails have all been spotted in the area in recent months.

A celebration event, featuring heritage themed activities for families, children and adults, will be held around the reopened river and town hall on Saturday 25 June from 12 noon to 4pm. The event is free and everyone is welcome. For more information, please visit rochdale.gov.uk/events