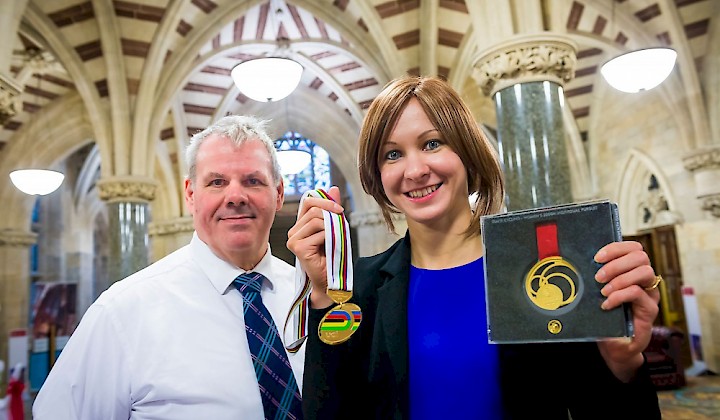 Rochdale’s gold medal-winning Olympians Joanna Rowsell-Shand and Nicola White are to be honoured with a civic thank you after their success at the Rio games.

Nicola, from Smithy Bridge, was part of the team that triumphed over the Netherlands in a women’s hockey final that gripped the nation. Her late goal levelled the scores between the sides and took the match into a penalty shoot-out which saw the Great Britain team eventually win the game. She was previously invited to a home-coming celebration in Rochdale after winning a bronze medal at the London 2012 Olympics.

Multi-medal winning Joanna, who has won gold at the 2012 Olympics, the World Championships and Commonwealth Games and lives in Middleton, relocated from south London to concentrate on cycling full time. The record-breaking road and track cyclist was an MBE in 2013 for her services to cycling.

Both, along with other local competitors who featured in the Brazil games, will be invited to meet the Mayor of Rochdale and the leader of the council.

Council leader Richard Farnell, who met Joanna following her gold medal win at the 2014 Commonwealth Games, said: “Like millions of others I was captivated by the performances of Team GB at the Rio Olympics and proud of the contribution made by athletes from our borough. Their successes should inspire all of our young children to know that they can achieve anything if they make the same sacrifices and produce the same effort as these two fantastic sportswomen.Well done to Nicola and Joanna and the other local sports stars who competed in Rio – they are all a credit to the nation and our borough.”