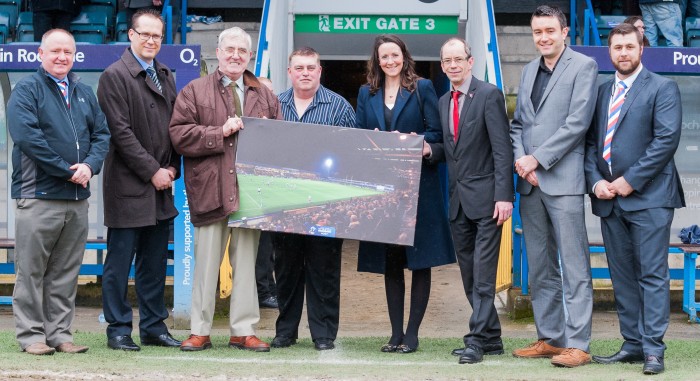 Representatives of the group responsible for managing the clash between Fiji and Ireland were presented with framed commemorative photographs of a sell-out Spotland stadium by RLWC2013 officials at half time during Rochdale Hornets Challenge Cup game against Leigh Centurions.

The Rochdale game was organised by a partnership between Rochdale Borough Council, Link4Life, Rochdale Hornets and Denehurst Park Stadium.

The presentation came on the back of the announcement from World Cup organisers that the tournament had been the most successful in the history of the game.  The bumper crowds and commercial success of RLWC2013 allowed the tournament to deliver a record financial return in excess of £3.7m to the Rugby League International Federation.

Rugby League World Cup 2013 reached new areas and attracted new fans to the sport with 14 per cent of tickets purchased by people gaining their first experience of Rugby League.  The event experience provided for fans at the matches was highly rated, with 91 per cent of spectators rating their RLWC2013 experience as eight or more out of 10 and 73 per cent of fans stating it was better than any other sporting event they had attended in the past.

“The game in Rochdale was a great success, achieving a stadium record crowd and really capturing the public imagination. Our congratulations go to everyone involved.  After the excitement and euphoria of the tournament and what we felt we had achieved in terms of fan engagement and reach, it is very satisfying to have that reflected in the research.  The staging of the tournament was always focused on generating increased interest in and engagement with the sport and these findings show the opportunity that the sport now has to grow.”

Whilst 8,872 watched the game in Rochdale, more than 450,000 spectators watched the tournament live overall and the competition pulled 18.8m television viewers in the UK, Ireland, Australia and New Zealand.

One of the souvenir prints will be displayed at Spotland Stadium, with the other shortly going on temporary display at Number One Riverside in Rochdale before moving to the town hall.