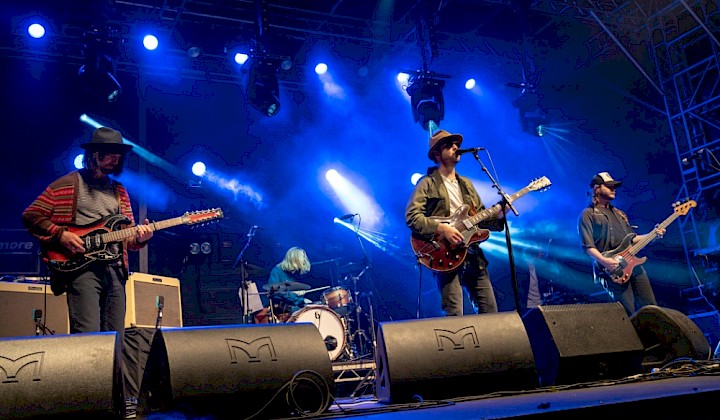 MAIN STAGE: The Coral headlined the main stage this summer, with the festival featuring over 40 live acts across the day.

With this summer now a fading memory, attention is turning to next year’s Rochdale Feel Good Festival and the date for 2020 has been announced.

The festival will return on Saturday 22 August and organisers Rochdale Borough Council are promising another showcase of top class entertainment, food and culture.

The new date comes hot on the heels of this year’s festival, which was headlined by The Coral and featuring another 40 acts across the day.  Around 11,000 people attended the festival this August.

The 2020 festival will include live music across indoor venues, a main stage sponsored by The Flying Horse Hotel near Rochdale’s world famous town hall, an extended food and drink village and other entertainment.

Past Feel Good main stage performers include The Coral, Feeder, Razorlight, The Fratellis, Cast, Scouting for Girls, Fun Lovin’ Criminals, The Hoosiers, Toploader, The Feeling, The South, Martha Reeves and the Vandellas and The Lightning Seeds.

The festival is organised by Rochdale Borough Council, with sponsorship from local businesses.

Councillor Janet Emsley, the council’s cabinet member for neighbourhoods, community and culture said: “Preparations for summer 2020 are underway, we are speaking with some exciting acts as well as looking through all the visitor feedback we received.    I am pleased to see this fabulous festival return. For many years now it has attracted some superb acts and is an unmissable event for thousands of people who I know will want to get the date in their calendar.”

As in previous years, another local band will get chance to play the main stage in front of a crowd of thousands. This year Rochdale country rock four-piece four piece Between The Vines won the coveted Battle of the Bands slot. The next competition will be launched in April with local acts encouraged to apply to win the prized slot.

If you or your business would like to get involved with the festival, email events@rochdale.gov.uk