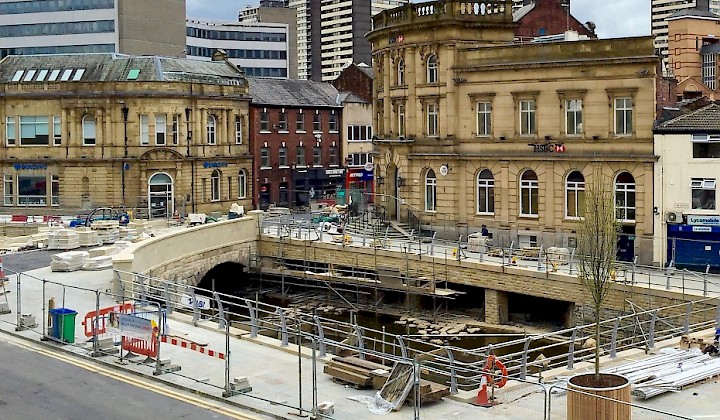 Rochdale Borough Council’s revealing the Roch project has received further recognition after being shortlisted for top awards at a major regional ceremony.

The project, which has been supported by the Heritage Lottery Fund, the Environment Agency and the North West Regional Costal Flood Committee, will vie for the prizes with construction projects from across the region.

The scheme, part of the council’s £250million town centre regeneration programme, has already been shortlisted for a Royal Town Planning Institute award for planning excellence and recently scooped the Considerate Constructor Scheme award for outstanding project management and the ‘Green Apple’ award for environmental good practice.

On completion, which is due next month, Rochdale will be the only town in Greater Manchester to benefit from an open river running through the heart of its central area. It will restore the setting of historic buildings, as well as reinstating the river’s natural heritage.

Steve Rumbelow, chief executive of Rochdale Borough Council, said: “We are really proud to have been nominated for these prestigious awards. It supports Rochdale Council’s ambitious vision for the Town Centre and is a testament to the hard work and commitment of our staff and our partners.

"Revealing the Roch will transform this part of the town centre and enhance the borough as a fantastic place to live and work in. This is a really exciting time for Rochdale and, with further regeneration projects in the pipeline, including Rochdale Riverside, the look and feel of the town centre will continue to flourish.”

"Professor Peter McDermott, head judge for the North West Construction Awards, said: “This year the standard of applications across the board has been really high and, as ever, it makes me really proud to be part of such an innovative industry.”

Work to reveal the river Roch, which began in spring 2015, is expected to be completed in May 2016.

The North West Construction Awards will be held at the Titanic Hotel, Liverpool, on Thursday 30 June 2016.