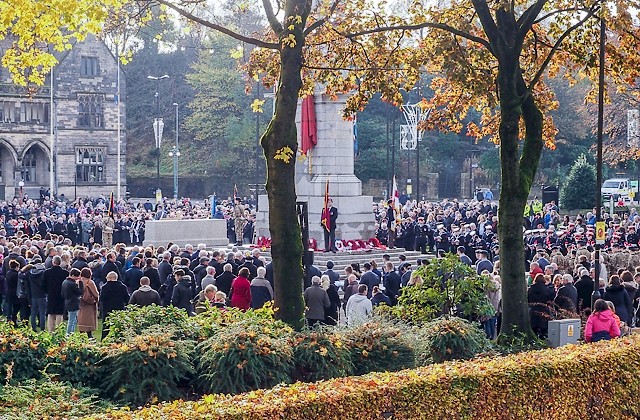 Thousands of people paid their respects to those who died serving their country outside the Town Hall for the annual remembrance service (Sunday 13 November).

The service began with a parade, lead by Rochdale Youth Band, from the top of Yorkshire Street, which passed over the newly-opened bridge to end at the Cenotaph.

Along with The Royal British Legion and veterans, organisations parading included the Sea Cadets, Army Cadets and the Air Training Corps.

Wing Commander David Forbes DL, President of the Rochdale branch of the Royal British Legion, opened began the service with The Exultation after the clock tower struck 11am.

The last post was sounded and those bearing flags lowered them for the two minute silence.

Wreaths were then laid by Mayor Ray Dutton, the President of the Legion, the Saluting Officer, the Deputy Lieutenant of Greater Manchester, Members of Parliament, Party Leaders; representatives of the three Armed Forces, the Senior Police, Fire and Ambulance Officers, the Royal British Legion and other ex-service organisations, magistrates and representatives from the churches and mosques.

Other organisations, including Brownies and Scouts, and members of the public were then invited forward to lay their wreaths.

The Reverend Margaret Smith, Town Centre Chaplain, then sang the hymn 'By A Monument of Marble', inviting the public to accompany her after the first verse.

Father Paul Brindle of St Vincent’s RC Church then lead a prayer and a reading from the Gospel according to St John.

Rochdale and Littleborough Methodist Superintendent, Reverend Ron Hicks, followed this with a prayer, before a Universal Peace Prayer was read by a representative from the Council of Mosques.

This was followed by the hymn 'O God, Our Help in Ages Past' and the Lord’s Prayer, read by Reverend Mark Coleman, Vicar of Rochdale.

The Blessing and the National Anthem closed the service, before the parade marched along The Esplanade and around the Town Hall.

When several members of the public thanked Mayor Dutton for the service, he replied saying how important it was to him.

Wooden crosses adorned with poppies had also been added to the Memorial Gardens, some bearing the names of those who had fought in the wars, whilst others recognised the sacrifice given by all who gave their lives.