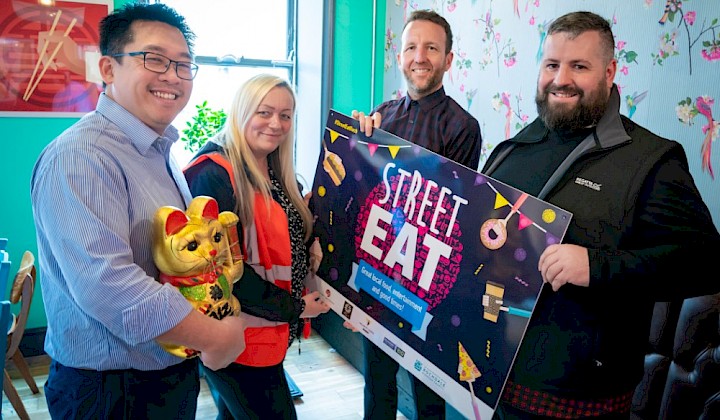 Building and construction company Wilmott Dixon are supporting this month’s Street Eat festival, which returns to Rochdale Town Hall Square on Saturday 25 and Sunday 26 May.

The company, which is developing the new £80 million Rochdale Riverside retail and leisure scheme in the town centre have renewed their support for the event, having also sponsored the two day festival last year.

Well over 4,000 flocked to Street Eat in 2018 – and hungry foodies are set for another Bank Holiday treat with lots to eat, drink and free entertainment, bringing together the town’s best food and drink establishments, including some new arrivals.

Tasty food from restaurant chefs will be served over the weekend, with dozens of mouth-watering dishes to choose from at £3.50 each, including Spanish, Italian, Thai, English, Indian, Chinese, German, American and more.

There will also be activities and rides for children, a bar for the adults and live entertainment for everyone, hosted by Revolution 96.2.

New additions to the menu this year include British Chinese eatery WowYauChow - opening on Lower Yorkshire Street this month. Indian street food and craft ale restaurant Bombay Brew which launches later this year at 1 Drake Street will be offering Street Eat visitors a sneak preview of some of their tempting dishes.

Danielle Whitworth, from Wilmott Dixon, said: “Street Eat is a fabulous two days which we really enjoyed last year and we’re happy to be sponsoring it again. The festival brings friends and families together to enjoy good food, drinks and live music in the great outdoors, the perfect way to spend some of your Bank Holiday weekend.  We’re looking forward to attending again and proud to be supporting an event so close to our Rochdale Riverside site which as visitors will see, is progressing well.”

The new Rochdale Riverside development built by Wilmott Dixon opening next Spring will feature 200,000 square foot of retail and leisure space, including a six-screen Reel cinema. The development, with a central pedestrian street, will transform the retail and entertainment offer in Rochdale. Next, Boots, JD Sports, Marks and Spencer, and River Island have signed agreements to take space in the development so far, which is more than 60 per cent let.

Paul Ambrose, BID manager from Rochdale Town Centre Management, which is organising Street Eat with support from Rochdale Borough Council, added: “It’s great to see this popular family event back for its third year and to celebrate Rochdale’s town centre eateries, including some new additions.  We are also excited to have the support of Wilmott Dixon again as headline sponsor.”

Street food traders will be selling an array of food alongside a bar, live music and children’s activities including Punch and Judy shows every hour, face painting, funfair rides, ice cream and healthy snacks.

Traders include The Baum, WowYauChow, Bombay Brew, The Medicine Tap, Issan Friends, Pudding Paradise, Vicolo de Vino and The Flying Horse Hotel – recently named one of the best pubs in Britain by the Campaign for Real Ale (CAMRA).

The headline sponsor is Willmott Dixon, with support from Pulsar Property Solutions and Rochdale Round Table.

Admission is free.  For more on the line-up visit www.rochdale.gov.uk/events and search #StreetEatRoch on Twitter.