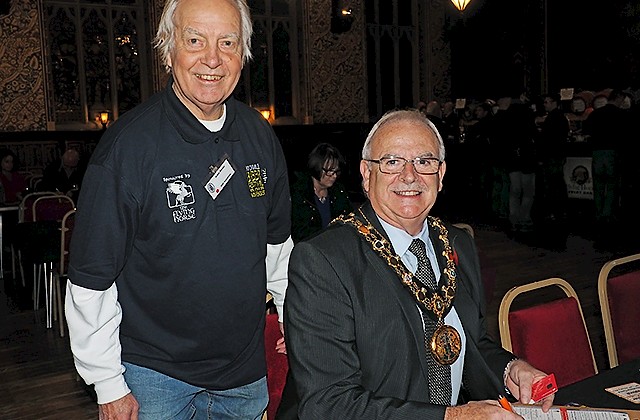 Former Mayor Robin Parker signed Mayor and Mayoress Dutton up as members of CAMRA (Campaign for Real Ale) on Thursday (10 November) night at the Rochdale Beer Festival at the Town Hall.

Mayor Ray Dutton opened the festival with a speech about the signing up for CAMRA and his chosen charities, Springhill Hospice, Rochdale Children’s Moorland Home and the Lee Rigby Foundation, which would benefit from any proceeds raised at the festival.

Over 100 real ales, ciders and perries are on offer, ranging from 3.6% to 7.2%, including foreign bottled beers and a hot food buffet. Each visitor will receive a commemorative beer glass, marked with the Town Hall and the CAMRA logo.

The event has been sponsored by 53 businesses and individuals including The Flying Horse Hotel, The Baum, The Regal Moon, CockaDoodleMoo, Vicolo Del Vino and many more.

The festival continues Friday and Saturday.