Jordan’s makes a move to the Wheatsheaf Centre 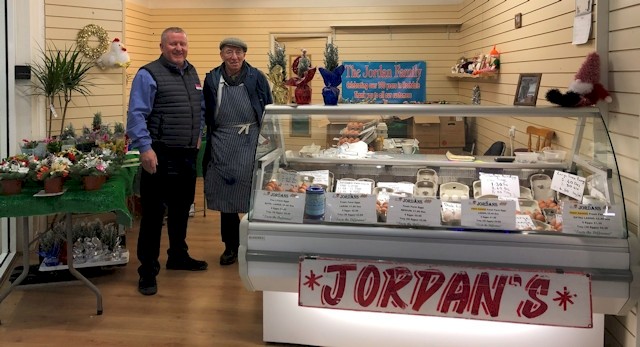 After moving around Rochdale multiple times, the beloved Jordan’s market stall has recently found a new home in the Wheatsheaf Shopping Centre.

Jordan’s stall has been famously trading eggs from the family farm for 100 years in Rochdale. Peter’s grandfather, Patrick, set up the family’s stall on Yorkshire Street back in 1919 and Peter has sold his farm produce on the stall since he was a teenager.

Peter Jordan, fondly known as ‘The Egg Man’ among residents, set up shop in the Wheatsheaf, located on Baillie Street, at the beginning of November.

His move into the centre is the fifth one he’s had to make, after Rochdale’s market was closed by the council in October. The council has since agreed to back a proposal allowing the market to be run by an existing trader.

Peter, who has been working on the market stall since 1960, said he is “very happy” with his move inside the shopping centre. He said: “It’s an ideal situation. We’ve got 700 regular customers per week and we’ve been up 15 per cent since moving here. There’s mutual advantages with new customers as well, I’d say that upper Yorkshire Street is becoming the main part of Rochdale shopping.”

Jordan’s sells fresh eggs from the family’s farm in Rossendale, which Peter’s son now runs, along with potted plants. He’s currently got some festive little Christmas trees at the minute and will be getting handmade wreaths in, too. He said: “We’ve got a niche in the market. In theory we sell a 24-hour fresh product.”

Mark also said that Peter’s stall will “fit very well in the Wheatsheaf” where his loyal customers seem to have followed. He added: “Hopefully it’s the beginning of a very long partnership.”

Now, Jordan’s is looking to the future. Peter says his granddaughter, Georgia, will soon be joining him in the Wheatsheaf to continue the family business through generations. He said: “She’s very good with the retail part. It takes a special person to be able to talk to people, to sell, and run a business.”

Jordan’s store can be found near Greenwood’s clothing store inside the Wheatsheaf Centre.