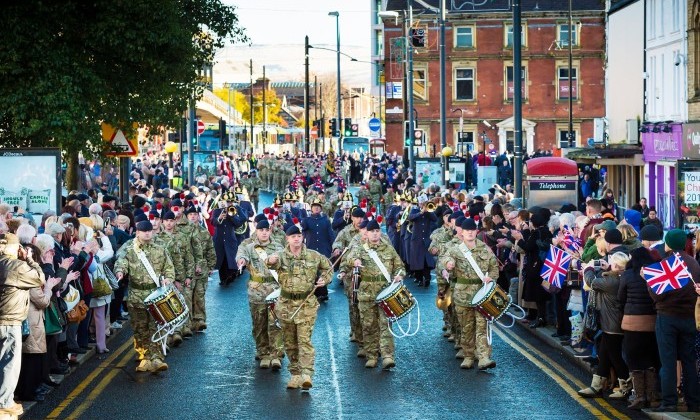 Last year’s homecoming parade in Rochdale by The First Battalion of the Royal Regiment of Fusiliers is now available to watch online. Rochdale Borough Council commissioned a short film to commemorate the parade held last November which saw thousands line the streets as the town centre was brought to a standstill to welcome home hundreds of soldiers returning from serving in Afghanistan.

To watch the parade visit www.rochdale.gov.uk/armedforces

The event was the first of just six parades to be held across the UK. As well as showing highlights of the parade, the eight minute film includes footage of the regiment in Afghanistan as well as interviews with council officials and formal corporal Mark Coulthard – the first to be recruited via the councils ‘guaranteed interview scheme’ for ex-armed forces personnel applicants where they meet certain qualifying criteria.

Councillor Alan McCarthy, Lead Member for the Armed Forces said it was a special day for Rochdale:

"The soldiers received a wonderful welcome in Rochdale and I was so proud to see so many people coming out to cheer on our service men and women. This moving film gives everyone a chance to remember the day and will be especially welcomed by those who were unable to attend as well as the families and friends of those who took part and the soldiers themselves.”

The town was bestowed the honour to host the parade in recognition of its historical links to the Fusiliers since 1881 and its continuous support for the Armed Forces. The Fusiliers were awarded Freedom of the Borough in 1947.

The council signed the Armed Forces Community Covenant in 2012, aimed at encouraging local communities to support services that promote and encourage activities that help integrate armed forces personnel back into civilian life.

Colonel Mike Glover from the Lancashire Headquarters of the Royal Regiment of Fusiliers said the regiment greatly values their links with Rochdale:

“I was extremely proud of the reception given to the lads by the people of Rochdale. For many years young men from Rochdale have served in the Lancashire Fusiliers, now the Royal Regiment of Fusiliers. The Regiment’s heritage is therefore Rochdale’s heritage. The Fusilier Museum in Bury attracts over 20,000 visitors a year, many from Rochdale.”

Current or ex Armed Forces personnel can register for help or get more information by visitingwww.rochdale.gov.uk/armedforces If they encounter difficulties when accessing services from the council or its partners email armedforces@rochdale.gov.uk or call the council on 01706 926989.