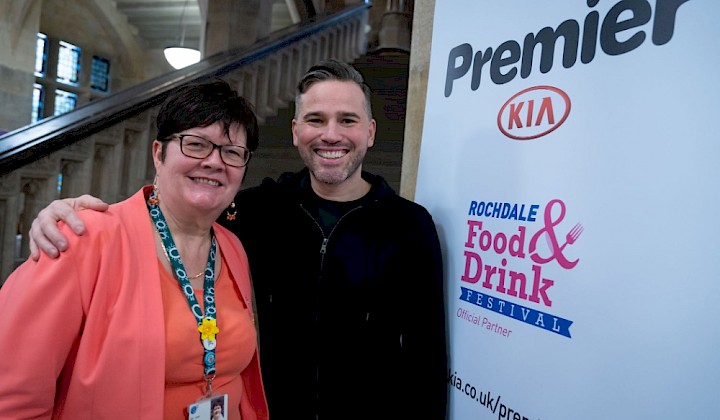 The celebration of food and drink was mostly inside the town hall, with chefs Dean Edwards, Andrew Nutter, Aazam Ahmad, Austin Hopley (The Baum), Noo Meenan and Adolfus Lewis (The Hare on the Hill) delivering sold out cookery masterclasses in the festival kitchen sponsored by Quirky Catering, with many visitors also watching on big screens in the Clock Tower Dining Room.

Mr Bloom from CBeebies got the loudest reception of the day, performing three sold out shows to 300 excited children and their parents featuring his trademark veggie stories, gardening games and nursery songs!

Across the road at The Medicine Tap their gin and sausage tasting provide a popular addition and visitors also got a sneak preview of their new Vault Cocktail Bar.

Outside for those brave enough to battle with the rain there was a menu of live local music, with Rochdale’s Joe Dunne, acoustic quartet #Hashtag, singer/songwriter Katie O’Malley, new indie/rock band 25th Hour and southern rock style country duo Between the Vines taking to the stage.

Despite the weather visitors praised the festival over the weekend on social media, with comments including “brilliant,” “had a great time,” “lots of fun” and “inspiring.”

Councillor Janet Emsley, the council’s cabinet member for neighbourhoods, community and culture, said: “Although the weather wasn’t kind to us, the show must go on and thankfully most of the festival was inside or under cover.  I would like to thank everyone who came and supported the event as well as our sponsors, Premier Kia and The Quirky Catering Company.  We’ve had some excellent feedback already and I know our visitors were impressed with the quality of the entertainment on offer, the variety of stalls and the lovely setting of our wonderful town hall. We’re already planning for next year’s festival.”

Ben Boothman, owner of festival kitchen sponsor The Quirky Catering Company added:  “We had a great day and were really pleased to be involved with the festival event again.  The atmosphere in the town hall was fantastic and the chef demonstrations were superb.  I was very proud to watch Adolfus and Austin, they put on a great show!”

Rochdale Food and Drink Festival was organised by the council in partnership with Premier Kia.

To view photographs from the day visit www.rochdale.gov.uk @RochFoodFest on Twitter and Rochdale Food Festival on Facebook.