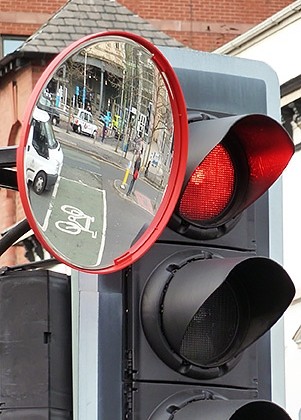 The first ‘Trixi’ safety mirrors have been installed in Rochdale to help improve road safety for cyclists, as well as the mirrors, more advanced stop lines for cyclists have been placed at specially identified junctions.

Some junctions in Rochdale will now display large convex ‘Trixi’ mirrors fitted to traffic signals. These give drivers of large vehicles better visibility of cyclists who can be caught in a blind spot. The mirrors also raise awareness of cyclists on the road and the need to share space respectfully.

‘Trixi’ mirrors have been placed at a number of locations across the borough:

Advance stop lines for cyclists have also been marked at some junctions, allowing cyclists to position themselves ahead of and in full view of other traffic, away from exhaust fumes.

Advanced stop lines have been marked at the following junctions:

Transport for Greater Manchester is leading the £650,000 safety scheme, which has full support from Rochdale Council.

A spokesperson for Rochdale Borough Council said: “The introduction of Trixi mirrors will greatly improve the visibility of cyclists, who can be hidden in a HGV driver’s blind spot, so will help to reduce the accidents involving cyclists at these junctions.

“We have also worked closely with Transport for Greater Manchester (TfGM) to introduce advanced stop lines for cyclists at seven key junctions in the borough. These safety measures will encourage more people to ride their bikes, especially for the commute to work.”

The scheme is being implemented throughout Greater Manchester with the £650,000 funding coming from the Department for Transport’s Cycle Safety fund, which is administered by leading UK charity Sustrans and the Greater Manchester Casualty Reduction Partnership.