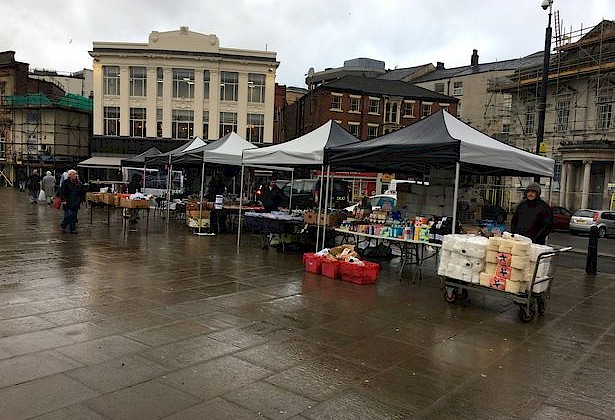 The council has agreed to let traders run Rochdale market after a new proposal on how it could be run was put forward.

The new plan will see an existing trader run the market independently after the council relinquishes control at the close of trading on Monday 14 October.

Intensive discussions have been held between council staff, traders, and councillors since it was announced last month that the market could no longer be financially subsidised by the local authority. The decision was taken as fluctuating attendances meant it was costing the council between £3,000 and £4,000 a month to operate.

The new agreement means some will continue to trade outdoor on The Butts, while others have been found new homes in the town’s Wheatsheaf shopping centre, which has made space available for two traders - Peter Jordan, who is affectionately known as the ‘egg man’, and another stall selling replacement watch batteries and straps.

Councillor John Blundell, the council’s cabinet member for regeneration, business, skills and employment, called the outcome a “win-win” situation for everyone involved. “I am really happy a trader has come forward with new proposals. I could always see the market working, as long as it had the right people running it.

“This is why we asked the traders for a plan on how they could run it themselves earlier in the year. Now I think they have the right ideas for taking the market forward and those that wanted an indoor market have found a home in the Wheatsheaf.

“In the medium term we have saved the taxpayer tens of thousands of pounds and hopefully have retained Rochdale’s market. I’d like to thank everyone for pulling together to find a solution and I wish everyone every success in the future.”

Councillor Ashley Dearnley, leader of the Conservative group at the council who was part of the discussions said: “It has been encouraging that we have all been able to work together to find a solution for the market. I wish the traders every success in their new venture and encourage everyone in Rochdale to support them.”

The final details of the proposal will now be drawn up so that the market can continue operating after Monday. The market hall building will remain closed while an alternative use for it is found.