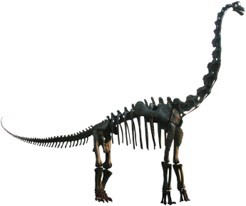 Brachiosaurus was an unusual dinosaur that lived 155.7 million to 150.8 million years ago during the mid- to late Jurassic Period. Specimens have been found primarily in the fossil-rich Morrison Formation in North America, but the dinosaur did not resemble any of the others that roamed the region. Its long neck made it look like a giraffe, and its forelegs were longer than its hind legs. The name Brachiosaurus, in fact, means "arm lizard."

Brachiosaurus was likely a warm-blooded animal. Some models suggest Brachiosaurus and other sauropods (long-necked dinosaurs) were gigantotherms — animals whose enormous size allowed them to keep high body temperatures. Calculations based on this theory indicate a body temperature of up to 113 degrees Fahrenheit (45 degrees Celsius) for Brachiosaurus. In 2011, however, researchers were able to directly calculate the dinosaur's temperature to be 100.8 F (38.2 C), by measuring the ratios of certain isotopes (atoms of elements with a different number of neutrons) in Brachiosaurus teeth. The study, published in the journal Science, suggests Brachiosaurus had behavioural or bodily mechanisms to keep cool despite their large size, such as having a lower metabolism during adulthood.

It's unclear just how large Brachiosaurus really was because most size estimates for the dinosaur come from fossils of what was thought to be its African form, B. brancai. But in a 2009 study in the Journal of Vertebrate Palaeontology, palaeontologist Michael Taylor reanalysed the fossils of B. brancai and B. altithorax (the North American species), and determined that B. brancai should belong to its own genus, reclassifying it as Giraffatitan brancai. Taylor later estimated that B. altithorax was about 82 feet (25 meters) long, though the dinosaur may be even larger than this, as the fossils of both G. brancai and B. altithorax came from specimens that weren't fully grown. Additionally, Brachiosaurus may have weighed about 62 tons (56 metric tons), according to 2014 study in the journal PLOS Biology.

Palaeontologists once believed that Brachiosaurus lived mostly in the water, due partly to its nostrils being at the top of its egg-shaped head. But this likely was not the case for several reasons. For one thing, sauropods had air-filled pockets inside their bodies, which would have made them quite buoyant and unstable if they entered deep water, according to a 2004 study in the journal Biology Letters.

Instead, Brachiosaurus and other sauropods stuck to land, and probably even preferred flat land due to the high energetic cost of climbing hills with their incredibly large bodies, according to a 2014 study in the Journal of Theoretical Biology. "They're not going to climb hills unless by climbing it they are accessing a really good source of energy," said study co-author David Wilkinson, a biologist at Liverpool John Moores University in the United Kingdom, who adds that the energetic cost is only part of the story. "Clearly, a big animal on steep ground is more likely to fall over and lose its footing."

Unlike most other sauropods, Brachiosaurus had long forelimbs that caused its back to incline. If its neck exited its body in a fairly straight line, as is currently believed, this would have resulted in it pointing upwards, though the exact angle and flexibility of its neck continues to be debated.