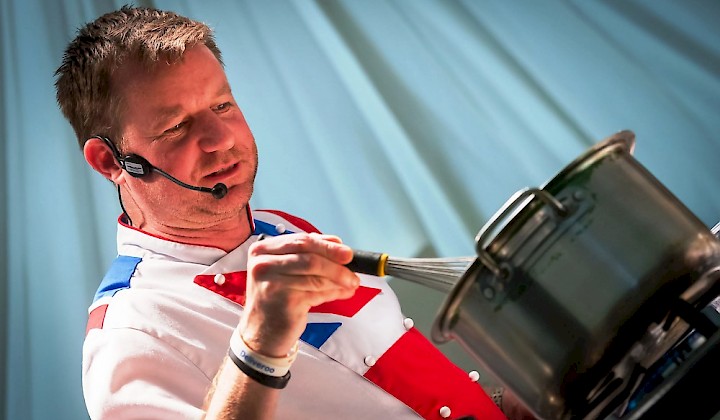 A feast fit for a Hollywood star: Andrew Nutter in action

Celebrity chef Andrew Nutter will be swapping his big name restaurants for Rochdale Town Hall as he prepares to whip up a feast in honour of the late, Dame Gracie Fields.

The well-known chef, who is currently receiving rave reviews for his new venture, the Bird at Birtle, will join the town hall team to cook up a storm for a celebratory dinner dance on Friday 16 September.

The dinner will mark the start of a spectacular weekend of events to honour the Rochdale-born singer, actress and comedian, which will culminate in the unveiling of a statue of Gracie in Rochdale town centre.

Andrew said: “I was involved in the centenary celebrations for Gracie at the town hall and the food went down really well, so I was more than happy to come on board again.

“I’ve thought carefully about all aspects of the menu and it’s very much inspired by Gracie’s Rochdale roots. As she was born above a fish and chip shop, we’re starting with a classic fish and chip appetiser, while the celeriac soup, which was so well received at the centenary, will be making an appearance again. The chicken surpreme and beef suet main is the kind of hearty northern dish that Gracie, as a down-to-earth Rochdale girl, would definitely have approved of. The dessert will be a specially commissioned torte, but we’re keeping the details under wraps, because we want it to be a surprise on the night.

“I think the evening will epitomise everything that Gracie was about. We’ll have good North West food to commemorate the honest Northern lass she was and we’ll have the glitz and glamour of the 1950s to remember Gracie, the Hollywood star. I’d really like to join in myself, but I’ll be in the kitchen! I’m sure I’ll be popping out a few times to see how things are going, though.”

It will be a busy few months for Andrew, who regularly cooks at Rochdale’s annual Feel Good Festival. His next mission will see him trekking in Ethiopia this October to raise money for Action Against Hunger, with a charity fundraiser set to take place at his restaurant, Nutters, in September.

He said: “I like to get involved in lots of different things around the Rochdale borough. You have to be involved to make it a better place – and it keeps me out of trouble! I think this Gracie event will be a fantastic night and I’m just so excited to be involved.”

The dinner dance, which will also feature Gracie music, as well as dancing from the era, will be followed by free Gracie inspired children’s activities at Touchstones Rochdale on Saturday 17 September. The statue will then be unveiled by a celebrity guest in Rochdale’s Town Hall Square on Sunday 18 September at 1pm.

Tickets for the dinner dance are on sale now. To book on, and to find out more about other activities taking place during the celebration weekend, please visit: rochdale.gov.uk/gracie