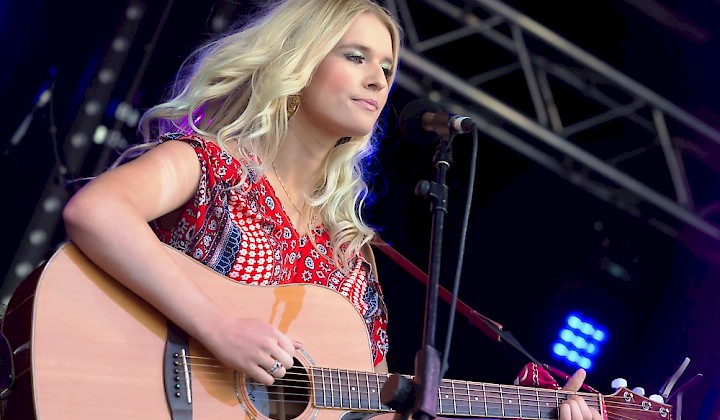 Singer/songwriter Amy-Jo Clough will return to the main stage at Rochdale Feel Good Festival in August.

The rising star from Bolton-le-Sands who releases her latest EP ‘Integrity’ next month got a superb reception in Rochdale in 2015 with her soulful, bluesy covers as well as her own catchy songs, accompanied on acoustic guitar.

The 18-year-old has already caught the attention of BBC Introducing, who praised her music. She’s played alongside The Vamps, Pixie Lott, Little Mix and Scouting for Girls and supported Alexander O’Neal and Rick Astley, and has had her country-pop sound compared to ‘a young Taylor Swift.’

Amy said she was looking forward to appearing at the festival again: “Rochdale was absolutely fantastic last year and I’m so excited to be returning this August. The Feel Good Festival has such a warm family friendly atmosphere and the line-up looks even better than last time.”

When she’s not busy with her music, Amy-Jo puts her dancing and acting skills to use, working as choreographer for pantomimes at Lancaster Grand Theatre and taking on roles such as Sandy in Grease and Chiffon in Little Shop of Horrors.

Amy will be joined by previously announced headliner The Fratellis alongside dub reggae act Resonators, alternative rock band Boomin, singer-songwriter Alex Cornish, rock n’ roll trio The Twisted Dolls, funk/pop band The Bright Black and the winner of this year’s Battle of the Bands competition, to be decided next month.

The festival includes live music across indoor venues, the main stage sponsored by The Flying Horse Hotel against the backdrop of the town hall, and Stage 2 - the community stage.  Chefs and food producers including Chris Bavin, Nisha Katona, Aazam Ahmad, Andrew Nutter and Tom McNeeney will host live cooking demonstrations throughout and the festival will also include the popular food market.

The event is funded by Rochdale Borough Council together with sponsorship from Rochdale Football Club, The Flying Horse Hotel, Link4Life, The Royal Toby and other local businesses.