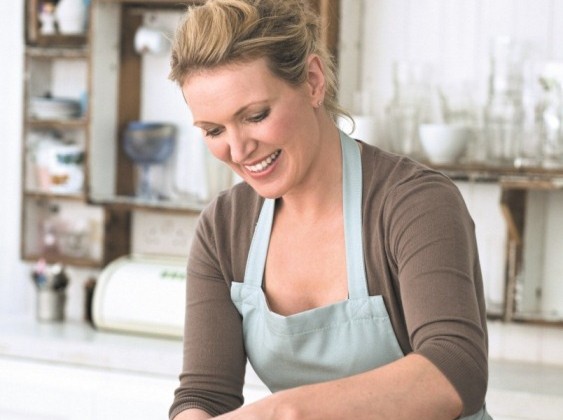 PRIZE: A chance to cook with Rachel Allen in Rochdale on Saturday 5 September.

Hopwood Hall College, sponsor of the Celebrity Kitchen at next month’s Rochdale Feel Good Festival, is offering one lucky winner the chance to hop up on stage and cook with TV chef and best-selling author Rachel Allen.

The Irish cookery queen will be demonstrating her skills at the festival on Saturday 5 September and is on the lookout for someone to help her out during her demo at 2pm.

Famous for cooking simple and delicious food, as well as a familiar face on television, her series is the highest ever rated show on the Good Food Channel and has been broadcast in 27 different countries. A regular guest on top cookery shows, Rachel has her own range of cakes and dessert flavoured confectionery. She’s the author of numerous bestselling cookery books and on the way to selling two million copies worldwide with ‘All Things Sweet.’ Another best-seller ‘Rachel’s Everyday Kitchen’ was published in 2013.

To be in with a chance of winning, all you need to do is answer the following question:  What date is Open Enrolment for Hopwood Hall College?

You can send your answer to events@rochdale.gov.uk or enter on the festivals Facebook page – www.facebook.com/feelgoodfestival An answer will be picked at random on Tuesday 1 September.

“For fans of Rachel Allen this is a dream come true. She’s a really well respected chef who also makes cooking fun. We can’t wait for the festival.  It will be a great opportunity for our students to learn from some of the best chefs in the country and showcase the skills they’ve gained so far on their courses with us.”

Rachel Allen will be demonstrating her cooking skills on Saturday 5 September at 12pm, 2pm and 4pm, alongside previously announced chefs Kevin Woodford and Aazam Ahmad. On Friday Aazam appears with Andrew Nutter and James Holden.

Rochdale Feel Good Festival is on Friday 4 and Saturday 5 September promising another showcase of entertainment, food and culture. There will be live music across indoor venues, a main stage sponsored by The Flying Horse Hotel and Stage 2 - a second outdoor stage showcasing local talent.

Music acts on the main stage line up include The South, Toploader, Kirsty Almeida, ska band The Uplifters, Shakedown Stockholm, The Renegade Girls, and Rochdale’s own alternative rock band The Hotspur Press.